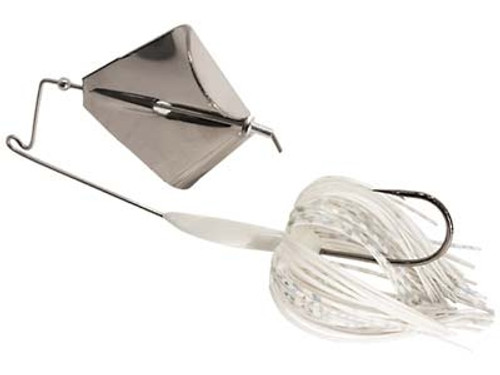 Constructed using a tungsten head, rather than the traditional lead, the Eco Pro War Cry Buzzbait possesses a smaller profile that benefits anglers in a number of ways. Designed by Elite Series professional, Jared Lintner, the War Cry was engineered to meet the demands of tournament bass anglers seeking the thrill of a vicious topwater strike. Upon the first cast, anglers will notice the buzzbait runs completely straight without any sort of tuning. Any angler who has experience fishing buzzbaits knows this is a deviation from the norm - quite a few brands of buzzbaits require testing and tuning to get the wired bait running straight - not the War Cry; straight as an arrow every time. The second aspect worth noting is the unique sound the Eco Pro War Cry produces. The blade is designed to offer anglers a range of pitches that correspond the retrieval speed utilized. When retrieving the War Cry quickly, the buzzbait renders a rapid clicking sound produced by the constant contact between the blade and the tungsten head. This dense metal and blade combination create a sound that's very distinguishable from others on the market today.

Where the War Cry Buzzbait really shines, however, is with a painfully slow retrieve. The banana-shaped head and small head section allow the bait to remain atop the water's surface quite easily. The bait remains in the strike zone for long periods of time, just daring bass to strike it. A characteristic that's especially valuable when making precise pitches or casts around ambush points. As mentioned, the sound this slow reeling retrieve generates is deliberate and best equated to the sound of a baitfish or bluegill struggling along the surface. It kind of sounds like the bluegill under the mats as they make that popping sound, but it also generates the commotion you often see from shad fleeing from predators. Simply put, it's awesome!

The Eco Pro Tungsten War Cry Buzzbait is made from a lighter wire than typically found on buzzbaits, this is intentionally selected to enable easier collapse upon the strike delivering much more solid hooksets with the 3/0 super sharp hook. While, the idea of a buzzbait collapsing may elicit the idea it's fragile, that is far from the truth. Actually, this buzzbait is extremely durable. It takes a hit and bounces right back ready to be put through the ringer again.