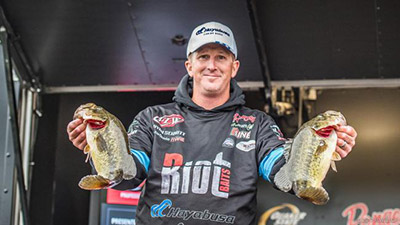 Turn back the clock ten years and take a look at the landscape of professional bass fishing. In many ways the progression of the sport has experienced exponential growth outpacing the evolution of most mainstream alternatives. From a knowledge standpoint one could argue that NO sport has benefited more from the advent of the internet; forums, archives, Youtube - the learning curve has become shorter and more readily available to those willing to apply the knowledge and put it into practice.

Professional anglers attire has followed suit changing from vests with patches to athletic fit jerseys covered with sublimated sponsors and supporters logos. But perhaps the biggest change in the sport is more philosophical in nature than anything else; one that seems so common place nowadays, yet, just a decade prior would be looked down upon by the sports' elite.

Arguably the biggest change in the professional ranks is the prominence of finesse culture led by the sissy fishing west coast anglers. No time of year may be more well suited to finesse fishing than the dog days of summer when bass become increasingly difficult to catch.

Among the proficient fairy-wand anglers is FLW Tour pro Cody Meyer whose use of a spinning rod and light line grew out of necessity due to the clear water reservoirs he cut his teeth on. Since venturing out on tour he's adapted his finesse approach for the conditions he's faced and become one of the anglers most readily pursuing summer time bass with finesse tactics.

His reliance upon light line techniques is due in large part to the habits of bass during the warm weather months, as he explains, "During the summer season I have focused my search for bass in three distinct scenarios: structure oriented out in deep water, buried in grass or super shallow wolfpack bass in search of easy meals."

Meyer continues, "Each of these scenarios has proven ideal for finesse tactics, albeit, each calling for a far different approach." Perhaps the most intriguing facet of his three pronged approach is the fact that each calls for the same bait: the Jackall Flick Shake Worm. "The versatility of the Flick Shake wasn't something immediately evident to me when I first started using it. Like most anglers I was content with the success I had rigging it with the wacky jig head," as he admits, "I missed out on a lot of its real worth because I was too narrow minded." 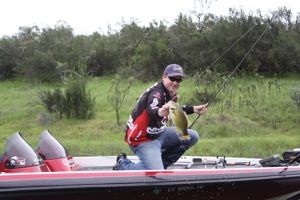 Meyer's summer time bass search mirrors a lot of other anglers in structure. He first seeks out areas with sufficient grass that are textbook bass locales when the water warms and bass become partial to shade and the high oxygen content afforded by vegetation. Instead of grass mats that require heavy weights and near perfect precision to locate bass, Meyer prefers to dissect outside sparse grass beds that are adjacent to deeper water.

Meyer explains this philosophy stating, "Bass live in grass year round, but at no such time are they more congregated than in the summer time. If you can get a bite in the outside grass beds, its typically an indicator of a population of bass rather than a nomadic fish." He acknowledges the initial search for these groups to be, "like a needle in a haystack", but finds it to be much quicker with his wacky jig head approach.

Ideally, the grass he is after possesses either current or deeper water nearby serving as a migration route leading to the vegetation. Meyer employs the 6.8" Jackall Flick Shake with a 1/8oz Jackall Weedless Wacky jig head and surveys the areas by making long casts across the targeted grass. His retrieve is the key to realizing the full potential of the wacky jig technique and requires attention to detail on the angler's part.

Meyer instructs, "Working this technique effectively relies upon allowing the bait to experience its natural wiggling action during free fall. This means each time you lift the rod tip and the bait begins to fall, it must be on slack line. I personally shake the worm as I lift the rod tip, however, most bites occur on the fall."

Additionally, he's found a spinning rod with a very fast tip to help with his retrieve cadence enabling him to shake the worm steadily before allowing it to fall uninhibited. He gears up with a 7'2" Shimano Cumara medium power spinning rod which provides the length to move line and secure a solid hook set when fish bite far from the boat.

Wolfpacking bass is another intriguing scenario where Meyer prefers a finesse approach. For those not familiar with "wolfpack bass" the term refers to a group of bass traveling in packs up in shallow water when preying upon bluegill. This phenomenon coincides with the bluegill spawn which renders the bluegill utterly prone to attacking bass. Traveling in groups gives the bass the best chance of one member fulfilling their objective as the bluegill frantically scatter. In other words, strength in numbers. Any angler well versed in wolfpack bass is aware how fickle in nature these fish are and how unwilling they are to concede to another food source; they have one thing on their mind and that's a protein packed bluegill.

Meyer's first experience with these bass was one filled with frustration as he admits, "I saw hundreds of bass between 3-5 pounds just running the shoreline without even so much as a glance at my baits. I had almost completely given up on catching any of these bass, in fact I was dead set on getting away from them. Out of frustration of watching tournament winning fish swim by me, I made the longest cast I could ahead of the fish almost just to release some stress. It was then I hooked up."

Despite his new found success, Meyer realized this wasn't a sure-thing bite, in fact it was more of a numbers game that required putting a bait in front of as many of these wolfpacks as possible. To accomplish this he had to employ the oxymoronic technique of fishing fast slow - or getting the bait to the fish then keeping it in front of them. For this task he knew of only one bait that could provide enough action to entice strikes while remaining in one place: the Jackall Flick Shake worm.

His experience has now helped refine his approach with a standard rigging configuration. Meyer utilizes the drop shot rig with an uncharacteristically short leader of 6-8" and a small octopus hook which he threads through the Flick Shake wacky style. He keeps the drop shot weight as small as possible in order to present the worm with the least amount of disturbance when it hits the water. Keeping the worm in place he violently shakes the rod tip and waits for a bass to grab hold.

As previously mentioned, Meyer suggests curbed expectations, "This technique, and the whole wolfpack bass pattern for that matter, are simply a game of odds. You keep putting your bait in front of bass and eventually one falls for it. Don't expect to light the world on fire with numbers, however, five bites with this technique is usually going to be a day to remember."

Tackle considerations for this use of the Flick Shake include a 7'6" Shimano Cumara spinning rod, Shimano Stella spinning reel and 10lb Power Pro main line braid to an 8lb fluorocarbon leader. His leader line is often much longer for this specific use due to the aforementioned skittish nature of wolfpack bass. Meyer often incorporates a topwater walking bait when focusing on wolfpacking bass in order to mix it up a bit and take advantage of the opportunity for a truly big bite. 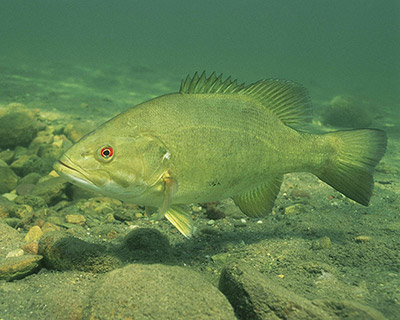 Meyer is no more at home than when fishing out in water 30 foot or deeper. One would infer its largely due to his upbringing in a California reservoir where 15 feet of water was considered shallow. His fondness of deep water has only increased with the advancements in technology that have placed him in the "meter man" or "video game fishing" group of anglers. These distinctions refer to anglers that rely upon their electronics to locate bass and ultimately "watch" them eat their presentation by way of their sonar units.

Fishing deep water for summer time bass is a technique where cover is key. Sure fish roam out deep, but it's typically en route to their deep structure haunts to which the fish will relate during the days of climbing water temperatures. Meyer explains the two vastly different types of deep water fish he targets, "Deep water summer time bass are typically one of two kinds of fish. You have your schooled up ledge fish which can fill the graph they are so thick, or you have fish suspending tight to brushpiles or trees." Meyer makes this important distinction because of the philosophy he uses with each.

For ledge oriented fish, his first choice is trying to catch them on some sort of reaction bait, be it crankbait, swimbait or umbrella rig. It offers the best opportunity to fill out a limit and get a school fired up in order to weed through fish. However, in the multi-day tournaments he competes in often the pressure of 150 anglers fishing the same ledges often proves overwhelming for the bass and leaves them with lock jaw. To overcome this inevitable occurrence Meyer turns to his finesse tactics employing a long leader drop shot outfitted with a wacky Flick Shake worm.

Meyer offers his reasoning saying, "When I first started fishing ledge dominated bodies of water, I kept hearing anglers' experiences of fish shutting down and not biting despite the large concentration still being metered below. I immediately knew I had to find a way to grind out a few bass when put in this situation and thought of no better way than with a drop shot." His choice of the wacky Flick Shake worm is derived from his desire to keep a bait in front of fish until they choose to strike it. Moreover, he makes use of a much longer leader - up to 20" - increasing the fall of the bait allowing it to realize its' full potential action.

Additionally, the three size options of the worm afford versatility in the size of his presentation in order to match the forage more accurately or to weed through smaller size bass. For this specific tactic Meyer scales up his finesse tackle a bit with a 7'2" medium-heavy Shimano Cumara spinning rod and Shimano Stella spinning reel paired with 10lb Power Pro main line and a 10lb fluorocarbon leader line. He rigs his dropshot with a small straight shank worm hook, 1/4oz drop shot weight and he begins with the 5.8" Jackall Flick Shake from which he will whether to downsize or upsize his bait accordingly.

As knowledge becomes more readily available via instant tournament articles, live video feeds and the ever growing knowledge archive that is the internet; so to does the introduction of new fishing applications. Nearly every week we are introduced to a technique or new take on an existing one. Despite all the advancements, the multi-bait rigs and the ultra-realistic swimbaits there's no denying the effectiveness of light line, small hooks and finesse baits. This summer downsize your presentation and experience the finesse effect.