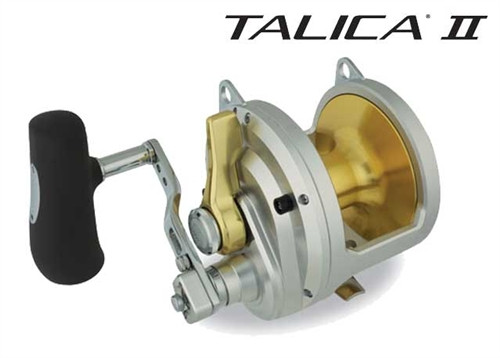 The Shimano Talica II Reel is a conventional, lever drag saltwater reel designed for casting small live bait. The Shimano Talica II is an incredibly light-weight lever drag reel that exhibits exceptional castability and strength. Traditionally when choosing a lever drag reel, power and castability were mutually exclusive options. Shimano has created the perfect balance of the two with the Talica II. The Talica is exceptionally light in weight as a direct result of the aggressive machining done to the spool. The well thought out engineering also included adjustments to reduce the drag of the water between the spool and the frame of the reel. The result of the many design elements geared toward castability result in a reel that can be easily cast underhand.

Despite the many features designed to reduce the overall weight of the reel, the Talica still maintains incredible power. The high efficiency gears anglers strength at both high and low speeds which is rare for this category of reels. The reel will perform flawlessly while battling even the largest of deep water monsters. The Talica possesses the smooth drag characteristic Shimano is known for; you'll be amazed at just how smooth this reel is.

The reel also displays unparalleled comfort highlighted by its ergonomic design that won't wear on the user nearly as much as traditional lever drag reels.

Here's what Shimano has to say about the Talica:
"Fly-lining live baits. Catching big fish on small leverdrags. Common sense says that this is an oxymoron. Star Drags are better casters by nature. They have lighter spools because the drags are in the gears, not the spool. Lever Drags tend to have more power in the drag system because their washers are so much larger.

With Talica 2-Speeds we set out to break the mold. We wanted to make a 2-Speed Leverdrag that could underhand a sardine 40 feet to the chum line with ease. We also wanted to increase the fishable drag capabilities of a small diameter reel to fish with heavy PowerPro and short Fluorocarbon top shots that anglers are using to land huge fish.

We also know, from our successes with HEG (High Efficiency Gearing) in our Star Drag reels, that we could make the ultimate 2-Speed: one with fast line pickup compared to traditional 2-speeds but with unbelievable crank power in either gear ratio. So when you drop it into low on a circling Tuna at deep color, instead of gaining a couple inches, you are gaining around 2 feet."