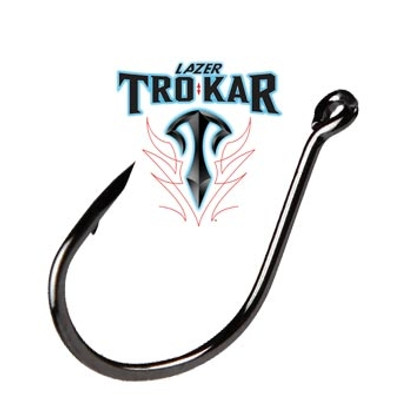 The Trokar Wacky Worm Hook is a heavy-wire wide gap circle hook designed for the wacky-rig technique used when bass fishing. The Wacky Worm Hook, from Trokar, was designed as the ultimate wacky rigging hook for all shapes and sizes of worms. The wacky worm technique consists of a soft plastic worm hooked through the middle of the bait in order to create a side slow falling, seductively wiggling, presentation that draws strikes from bass year round. Typically, anglers fish the technique with a soft plastic stick worm ranging from 4 - 6 inches in length as the bait generates a lot of action as it descends through the water column. Fishing this technique requires a hook that is capable of holding the plastic in place, but also has enough bite to penetrate completely through the plastic and into the bass's jaw. The Trokar Wacky Worm Hook was designed by professional anglers using their exact specifications. The hook possesses a wide gap that holds the soft plastic in place and allows the hook point to remain clear of the plastic for more efficient hook sets. Constructed from a heavy gauge wire, this hook is capable of handling big bass. Additionally, the up-eye design channels the force of the hook set directly into the fish's jaw. The Trokar Wacky Worm Hook possesses the same surgically sharpened hook point Lazer Trokar has become known for. We offer the Lazer Trokar Wacky Worm Hook in four sizes: 2, 1, 1/0 and 2/0 the quantity varies based on size.