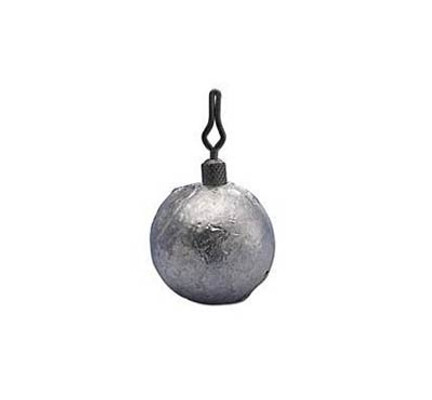 The Bullet Weights Drop Shot Sinkers are round fishing weights designed specifically for the drop shot technique often used for bass fishing. The drop shot weights, from Bullet Weights, are pretty straight forward; what you see is what you get. The weights are round in shape and features an easy attach, swiveling line clasp that simply pinches over the tag end of your line. The swivel aids in keeping line twist low allowing the soft plastic to spin as it wishes. The Bullet Weights Drop Shot Weights are available in four sizes: 3/16, 1/4, 3/8 and 1/2oz - quantity varies:

The last couple years there has been a lot of buzz about the bass fishing technique called drop shotting. Drop shot fishing started in Japan and was brought to the United States to be used on the crystal clear lakes of California where it was critical to be able to catch bass that relate to steep bluff drop-offs. What started as taking an old bass casting sinker, tying it on the end of the line, and then securing the hook a foot higher, has since been refined and changed. No longer are we using only bass casting sinkers. We have also switched to using specific drop shot weights that come with swivel locks that allow you to pinch the line in the keeper to hold it securely in place. One of the reasons for the swivel is to prevent line twists that occurr with other types of weights. With the swivel incorporated into the weight, that problem has been solved. The pinch swivel also allows for faster line changes and easy replacement of the sinker if it gets broken by the rocks or brush.