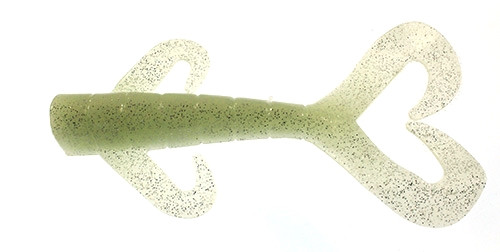 The 8" version of the Gibbs Delta Tackle Double Fin is a soft plastic twin tail grub designed to mimic several crustacean species which are a favorite meal of many saltwater fish. The Double Fin Grub, from Gibbs Delta Tackle, has become an increasingly popular choice among coastal saltwater anglers including those targeting bay bass, rockfish and ling cod among others due to the baits ability to imitate many of the primary forage species. The addition of a second set of appendages really separates this lure from other grubs used for Ling Cod, Rock Fish and other bottom fish. Many freshwater plastics have adopted more appendages and proven much more effective at calling fish in to investigate; Gibbs-Delta is one of the first to incorporate the design in a saltwater specific grub. The dual tails swim wildly upon descent, drawing the interest of fish looking for an easy meal and the "arms" subtly twists and turn to replicate the many appendages of shrimp, crab and squid.