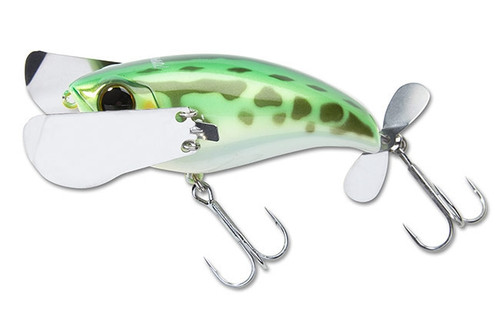 Engineered with the same great action as its big brother, the Jackall Pompadour Jr gives anglers a smaller option to match a greater variety of fishing conditions. Another one of Jackall's secret lures with an already established presence overseas, the Pompadour Jr is a walking topwater bait that mimics small amphibians, birds and large bugs as they crawl along the surface. Tackle enthusiasts may be familiar with this type of lure, many Japanese companies have released similar "crawling" topwater baits in the past most often to mimic the Cicada's which are a very popular food source for bass around the world. The Pompadour Jr is engineered with metal wings that collapse as the lure is cast through the air and flare out upon hitting the water's surface. As you work the lure back to the boat, you'll be amazed at the manner in which this lure moves - it is really quite astonishing how realistic its movements look.

What's really neat about the Jackall Pompadour Jr is the dual action it creates as it is retrieved across the water's surface. Not only is it going side to side or splashing around, it's actually rolling as it wobbles back to the angler. There's something about that roll that has always been a desired trait of swimbaits among the big bait crowd and the reason behind a lot of successful lures whether the everyday angler is aware or not. The Pompadour Jr creates a noticeable wake along the surface and it's rattle chambers inside are just another added bonus that creates an extra level of attraction. Speaking of noise, while the rattles are great, what really interested us was the noise created as the bait splashed the water. It's not something any of our staff has ever remembered seeing before - different from a buzzbait or popper or any other topwater lure to date. Very intriguing.

The Jackall Pompadour Jr measures 2.6" in length and weighs 5/8oz - it's really easy to cast and will certainly be fun to fish.