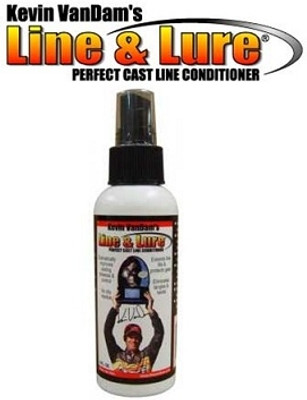 To better understand Line & Lure and the many benefits that the angler can expect, there are a few "dynamics" that should be pointed out.

The only real commercial competition for Line & Lure is Blakemores Reel Magic. It needs to be stated that oil based preparations like WD-40 and Reel Magic have been around since the 1960s and were used to address corrosion issues on reels and some of the problems that anglers were experiencing with monofilament line memory, the predominant line of the time.

Reel Magic and WD-40 are light oil with added petroleum distillates. Many of these distillates or solvents as they are commonly called are listed as toxic agents by the EPA and on the products label. The oil adds some level of lubrication to line but is very temporary. Just how temporary these products are, can easily be observed when casting after a fresh application. One will plainly see the oil slick it leaves on the water surface. We anglers love the waterways that we fish, so why would we use or condone the use of toxic products that wash into lakes, rivers and bays?

Reel Magic and WD-40 do have a relaxing effect on the corkscrew memory that we see in monofilament line due to the petroleum solvents added to it. Unfortunately, these solvents reduce memory by literally dissolving the outer surface of the line, making it softer but thereby weakening it. The continued use of these products, can contribute up to a 50% loss of monofilaments line strength. When these products are used on braid/super lines they can strip the finish that the factory coats these lines with. The finish is on these lines to protect the Spectra fibers from wear. The removal of this coating leads to premature wear and "fraying of the fibers". If that wasnt bad enough, these oils and solvents sprayed onto reel spools are also potentially getting into the reels moving parts including bearings, gears and seals. The very nature of the oil in these products draws and holds dirt to these parts, negatively affecting their performance and lifespan. The solvents in the products are known to degrade the seals and greases that the manufacturer built into the reel to protect the inner moving parts. Ask any professional reel repair technician and chances are that he will agree.

On the other hand, Line & Lure contains no oil or solvents. It is a blend of non-toxic, polymers that are not found in any other "line dressing or conditioner". The proprietary polymer blend in Line & Lure imparts a coating to line that actually bonds to the lines surface. In theory, this bond becomes a permanent part of the line. The only way to remove this coating is to abrade it from the line, by friction. The polymers fill any line surface imperfections and create a very uniform and smooth microscopic coating on the line. This smooth surface is inherently more resistant to wear by friction than is untreated line. In this case, this phenomenon provides multiple benefits.

First, as friction does start to attack the line (as it goes through the rod guides, over obstacles, etc.), the polymer acts as a sacrificial buffer to that friction. Practically, our replaceable polymer finish wears instead of the line itself. This of course extends the lines life tremendously.

Secondarily, these polymers are extremely hydrophobic, meaning that they literally push water away at the molecular level. This hydrophobic action reduces the amount of water that is retained on the line during a retrieve. It is this water surface tension on the reel spool that is a major contributor to casting distance restriction. This phenomenon is further demonstrated when we take into consideration the reduction in backlash that anglers find when using Line & Lure with bait casting reels. This surface tension principle is the same thing that one experiences when they pick up a sweating drinking glass and find the coaster being picked up with the glass. The less water on the line, the less the resistance caused by surface tension. This equals much longer casts and fewer backlashes! Less water on spinning reels means less line blowout and the resulting knots.

It is also easy to see that with less water retention on the line there will be less contaminants coming back up on to the reel. This is especially important when fishing in saltwater. As we all know, it is the salt crystals that form in-between the loops of line on reels that cause a lot of the wear damage to fishing line. This salt also invades the seals on reels and over time acts like sandpaper wearing on reel components. Just as on the line, the polymers in line & Lure protect the seals from the elements, helping keeping them in prime condition. The anticorrosive properties of Line & Lure also dramatically reduce corrosion damage to rod, reel and artificial bait surfaces. Simply put, Line & Lure greatly extends the useful life of fishing equipment, tools, lines and baits.

Line and lure contains extremely high sunscreen protection. This sunscreen blocks the UV rays from sunlight. UV radiation has a massively destructive effect on fishing line. Fishing line can literally burn at about half the rate as unprotected human skin! Using Line & Lure on your line is equivalent to using an SPF 30 on your skin. The competition has no more UV protection than baby oil.

Anglers are very happy with the benefits that they get using Line & Lure on monofilament line, but please keep in mind that Line & Lure was primarily designed by Kevin VanDam and RMR Industries to address the inherent problems anglers experience with fluorocarbon, co-polymers and braided lines. Other line dressings have little or no positive effect on these hi-tech lines.

After 1-½ years in development and testing by thousands of anglers around the world, Line and Lure has been proven to work effectively on any type of line made by any manufacturer. In addition, it is the only line conditioner that positively affects the flexibility, knot strength, casting and control of fluorocarbon line.