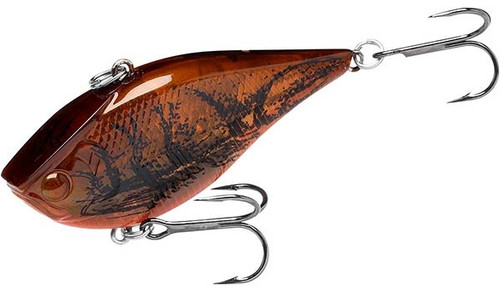 The Lucky Craft LV RTO is a new lipless crankbait designed by 2004 Bassmaster Classic Champion and power fishing expert Takahiro Omorio. Takahiro, known for his power fishing prowess, took his knowledge of the best and worst features of other lipless crankbaits and worked with Lucky Craft to produce the ultimate power fishing lipless crankbait. The bait sets itself apart from others in the lipless market with its unique features. One such feature is the fluttering action produced as it free falls, an characteristic that any experienced angler knows to be deadly on stingy bass. The flat head of this bait creates a nose down swimming action that allows the baits to be burned at one constant depth instead of rising to the surface and this same flat head provides optimal deflection off structure producing violent strikes. The profile of the bait will produce a vibration unlike any other in its class. For any angler who hates changing out hooks, be aware, this bait comes with strong, premium hooks so it won't be necessary to upgrade the hooks.

The lipless crankbait is known to be a great producer during the pre-spawn in grassy flat areas, and due to the unique profile of this bait it will easily rip free from those weeds and continue its retrieve weed free - this means fewer wasted casts. Conventional wisdom says this bait should be fished on braided line, but opinions vary on the best rod for the technique. Some would argue for a fiberglass stick, but the opposition would suggest a graphite rod. We suggest fishing the bait on both and deciding for yourself, each will feel different and have its pros and cons.
The Lucky Craft LV RTO 250 measures 3" in length and weighs 3/4oz.