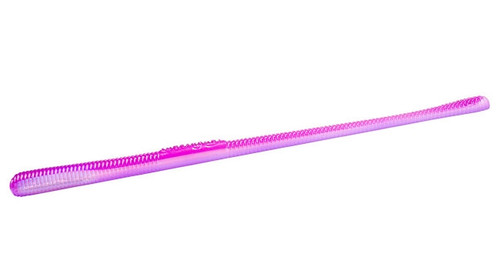 The Lunkerhunt Limit Worm is a soft plastic finesse worm featuring an internal mylar core that keeps the plastic from ripping when fish strike.The Limit Worm is not your typical plastic worm - it's construction is engineered to withstand the short striking fish that take your bait and leave you frustrated. In the Limit Worm, the mylar core is an inch long, and it extends from the tip of its head and ends near the beginning of the sex collar. The mylar reinforces the Limit Worm's weak points - where the hook is threaded through the bait. Because the action of a plastic worm is generated in the tail section, this design feature does not inhibit the action. In fact, the mylar section kind of acts like the head of a creature - making the tail section display a more natural wiggle.

By keeping the plastic free of salt impregnation, the Limit Worm remains highly buoyant, an ideal trait for the most commonly used technique: the drop shot. The smaller, 4 inch Limit Worm displays an even buoyancy throughout the body, and when it is rigged on a drop-shot rig, it floats completely horizontal. The 6 inch size is more buoyant than the smaller worm, and will have a slightly upward angle to it.

You'll notice the tail of the worm is slightly bulbous, this, along with the ribbed texture, combine to create more action with less movement by the angler. The natural flow of the water funnels across the plastic and generates a subtle wiggling - it's pretty neat. High quality pours make the Lunkerhunt Limit Worm an excellent choice for all of your drop shot applications.

We offer the Lunkerhunt Limit Worm in the 6" size which comes 10 per pack.