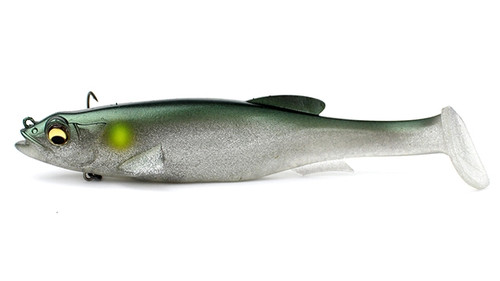 The Megabass Magdraft is a full body soft plastic swimbait engineered to deliver a pronounced tail thumping action that entices big fish to strike. This full body plastic swimbait displays the coveted two-way action: a tail-kicking swim and a side to side roll or shimmy. The Magdraft comes equipped with Megabass's patented mag hold system, which secures the treble hook alongside the belly via an internal magnet which hides the unnatural profile of the underbelly treble hook from wary predators. This design element guides the realistic swimming action displayed by the Magdraft and allows for productive retrieves in key grass areas. Furthermore, with a robust wire-through construction firmly joining line eye to hook, the increased hook-up ratio of bait will also translate into a higher landing percentage. As is the case with all Megabass products, the Magdraft is ingeniously engineered to resolve common issues with other company's offerings. As a means of eliminating rolling, the Magdraft possesses side fins designed to both prevent unnatural rolling action and act as miniature weed-guards to protect the treble hook in its magnetized position.

Measuring 6" and weighing 1.25oz, the 6" Magdraft is ideal for all bodies of water across the country. At only the length of your favorite plastic worm, this 6" swimbait will appeal to fish of all size and easily fit in the mouth of smallmouth and spotted bass. Anglers need not worry about oversized tackle, the 6" version can be fished effectively with many of the heavier jig rods or your standard swimbait option.

This is where the giant fish are separated from the dinks. The 8" Magdraft weighs 3oz - enough weight to require swimbait specific tackle in most cases. Anglers will find the 8" magdraft to produce a really nice thumping feel as it swims through the water. With this model, fishermen can mimic trout, hitch, tilapia and big shad that both largemouth and striped bass feed upon.

At 10" and 6.2oz, the Magdraft 10 is a beast of a swimbait, meticulously designed, for a thumping tail action that travels through the body, giving the head a subtle side-to-side shimmy that sends vibrations through the water column. Built for trophies, the Magdraft is equipped with a robust wire-through construction firmly joining line eye to hook for decisive hook-ups and control.

About the Mag Hold System

MAGHOLD System (PAT.P) is designed to minimize the visual presence of large hooks through the magnetic force of built-in Neodymium Magnets, keeping them aligned against the body for a more natural profile, smoother action, and surer hooksets.In the quest for ever-larger bites, many swimbait anglers attempt custom modifications to maximize the realism of both profile and action. For this reason, Megabass designed the MAGHOLD system, which delivers the higher hooking-percentage of trebles without resorting to burying the hook, all while hiding the unnatural shape of hooks from view.

We offer the Megabass Magdraft Swimbait in three sizes: 6", 8" and 10". More colors are available soon.