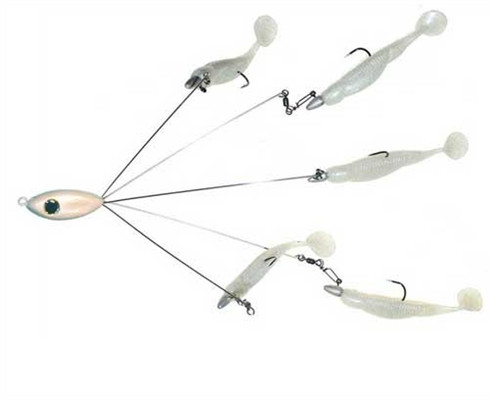 The Picasso School-E-Rig is a multi-wire Alabama-Style Rig that features a central lead-free head from which five wires extend and end with snap swivels. After the mind-boggling display by Paul Elias at the FLW Tour Open on Lake Guntersville, the Alabama-Rig popularity has spread like wildfire. Although resembling something you would see hanging above a baby's crib, the odd looking contraptions have proven to be unbelievable fish catchers. Stories of hundred fish days have quickly gone from fish tales to reality after more and more anglers got their hands on the A-Rig. In just the following three weeks after the FLW Open, and additional three major tournament titles fell victim to the Alabama Rig.

The original Alabama rig has spawned creations from just about every company on the planet and this product is Picasso's offering. The Picasso School-E-Rig is 8" long and weighs 1/2oz without baits attached, which are NOT included.