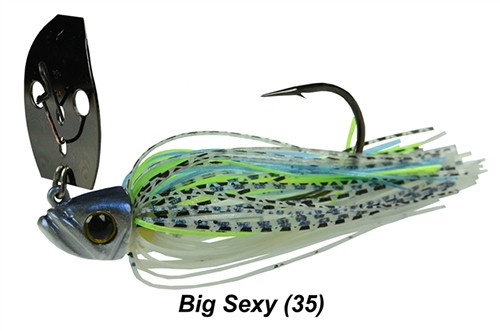 The Picasso Shock Blade is a vibrating style jig that displays an erratic swimming action as it is retrieved through the water. Living creatures are anything but uniform in their movements especially when it comes to prey being pursued by predators. Fishing lures are often limited in their ability to replicate randomness due to the laws of physics and principals of engineering, however, as technology advances, we get closer to replicating it. The Picasso Shock Blade seeks to capture a bit of the randomness of living creatures while also playing upon bass's reliance on their lateral lines for finding food. As is the case with many vibrating jigs, the Picasso Shock Blade makes use of a hinged blade to create a vibrating, frenzied swimming motion that looks like a real life fish and emits shockwaves through the water grabbing the attention of any nearby predator.

The Shock Blade is manufactured to bring you the very best in innovation and technology. The patent pending design creates a lot of thumping vibration and hunting action even when reeled at very slow speeds. The lure possesses a very tight/quick action and vibration that can be "burned" or "ripped" in order to change up the standard straight retrieve and play upon bass's curiosity. Picasso's unique design helps to keep the lure down and in the strike zone longer without rising which is a common complaint of other bladed swim jigs on the market. Constructed around Picasso's popular Smart Mouth Plus jig head with its concave belly that gives an added "wobble" action that fish cant resist. The Shock Blade's head is equipped with a double bait keeper, one on the collar and a wire barb on the hook shaft prevents slippage and will keep your soft plastic secure cast after cast. Many anglers have found these type of lures to work very well when paired with a swimbait such as the Keitech Swing Impact or the Yamamoto Swim Senko that really give the lure that fishy presence we're all striving for.

Picasso chose a black nickel blade for their Shock Blade which creates a subtle flash that draws the attention of fish in all types of water clarity and light conditions. Comes equipped with a super sharp 3X Strong Mustad Ultra Point hook that assures good hook penetration that will not open on the set and can handle big fish. Made in the USA.Patent Pending.