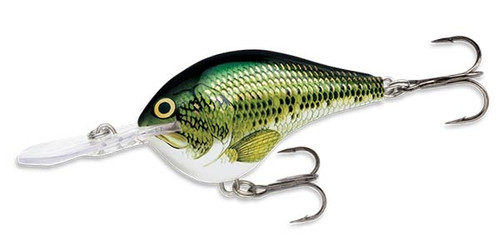 The Rapala DT 10 Crankbait has long been the go to for bass fishermen due to the lures' consistent diving depths, seductive action and quality components. Anglers have long chosen the DT series for all of their cranking needs from the ultra shallow DT4 all the way out to 20 plus feet employing the DT20 - and all depths in between. The DT (Dives-To) series of crankbaits, dive fast to their determined depth and stay in the strike zone longer than any than other crankbait on the market. Constructed from the top seven percent of balsa wood, this consistently perfect wood combined with carefully placed internal weights, tapered fuselage and thin tail design creates the ultimate crankbait action, found only in the Rapala DT series. Ultra-thin polycarbonate lip digs the bait down quickly to desired depth. Swimming with a side-to-side action only balsa crankbaits can achieve, the DT cranks deep, yet pulls with ease. Perfectly weighted to rest in a quick-dive nose down position allowing for immediate descent to desired depth, the DT can be easily cast 150 feet. Simply put, the farther the cast, the longer the bait stays in the strike zone. It's the most effective way to cover more water and catch more fish. Internal baritone rattle is tuned for best sound performance.

As the name suggests, the DT10 dives to 10 feet making it a medium to deep diving crankbait that can produce from the pre-spawn all the way into the fall. Of all the DT series crankbaits, the DT10 is well known for its prowess during the post-spawn period of the year. When bass begin their transition from shallow water to slightly deeper structure, they often group up on the first piece of deep water cover until the summer temperatures are in full effect and they push out deeper. Once summer arrives, many anglers turn to the DT16 for deeper water, however, the tops of ledges on Tennessee River lakes are often 8-10 feet deep and therefore the DT10 still plays a big part in their gameplan.

We offer the Rapala DT 10 Crankbaits in a number of excellent colors including including Ike's Custom creations. Length: 2 1/4" Weight: 3/5oz.

The DT10 Crankbaits feature several color patterns hand selected by Bassmaster Pro Mike "Ike" Iaconelli. Those who follow bass fishing, know Ike is one of a kind and his custom color DT crankbaits are equally unique featuring aggressive patterns that offer a level of detail never before seen in the Rapala line.The Rapala DT Series of Ike's Custom Ink series features color patterns that he had always wanted his favorite Rapala DT crankbaits to come in. As Ike explains, "I'm used to giving baits my own personal touch, tweaking them." Now those oh-so-special modifications come right out-of-the-box from Rapala in the Custom Ink Series. There are three key traits: first, it's their purposefully muted colors. Ike used to "bake them in the sun" on his trucks dashboard to get that life-like, muted skin tone. The subtler colors can be unbelievably effective when bass arent attacking conventional patterns.

Next, Ike had Rapala polish the finishes like the translucent candy apple red on a '57 Chevy for a natural, pearly finish. For the third pivotal ingredient, Ike went super sparkly - with glitter. Not just any glitter, but super fine sprinkles that actually add depth to the appearance of the lure. One of Ike's secrets is all about "using something different, something unique to catch more fish." Ike's Custom Ink DT's are all that and more. All come with premium VMC SureSet tail hook and black nickel belly hook. Each lure is hand-tuned and tank-tested to swim perfectly right out of the box.