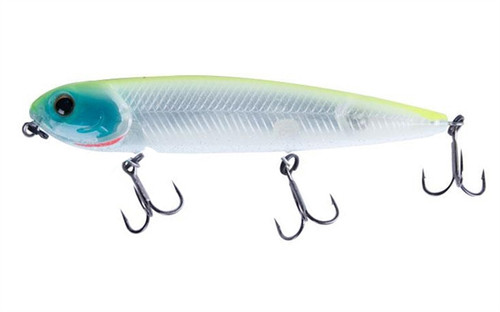 The Reaction Innovations Vixen is a topwater walking bait that returns to the market after a brief time out of production. Bringing with it a storied past, the Reaction Innovations Vixen is certain to be one the most popular topwater baits of this year and beyond. Constructed from a special formulation of plastic that is much harder than your typical injection baits, the Vixen's internal rattles emit louder sounds with a deeper, resonating tone. As the bait glides across the surface side to side, the rattles call the fish up from deep to come investigate. It's been referred to as the pied piper of topwater lures for its ability to pull fish from great distances. The action is just incredible - it walks effortlessly and does so whether you prefer a fast, aggressive retrieve or slower, seductive cadence. Attention to detail is second to none with these baits including enlarged, taxidermy quality eyes to the incredibly refined finishes; you can just see the level of thought that went into each component utilized and it's refreshing. Speaking of the finishes, the baits will keep their color patterns throughout their lifespan even after a number of vicious strikes. Another rarely mentioned quality of the Vixen over other lures is the castability which is largely due to the aerodynamic shape and 3/4oz weight of the bait. Seriously, you can cast this thing a mile. While you may not immediately see that to be of great importance, wait until the fish start breaking the surface around you and only your best casts are capable of reaching them - then you'll be happy you chose Reaction Innovations Vixen. The Vixen isn't just a spook knockoff, in fact the body actually has features molded right into it including gills and facial detail that replicates that of a forage fish.

Those not familiar with the Vixen may not be aware of the secondary market created when production was originally ceased. Anglers sought after these baits with unquenchable thirst for more and it lead them to eBay and classifieds to buy them at astronomical prices. Baits went for upwards of $50 and even with very similar alternatives, they still held steady until news of their impending release.

The Reaction Innovations Vixen is an extremely effective topwater lure that will produce bass all over the country and deliver those exciting topwater strikes we all live for. The Vixen measures 4.75"in length and weighs 3/4oz, available in many excellent colors.