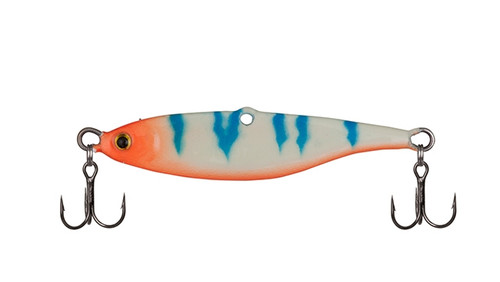 The Sebile Vibrato is a vertical jigging lure which delivers a new concept to the world of vertical jigging lures. The Vibrato, from Sebile Lures, is intended to be fished as a vertical jig or trolled, but has also proven effective when retrieved like a rattle trap with an up and down "yo-yo" style action. As the name suggests, the Vibrato was engineered to produce an intense vibration throughout the water upon retrieval. The vibration effect is largely derived from the lures uniquely tapered body which displays a larger belly that tapers into a thinner back of the lure where the line tie is located. The Vibrato has an ambiguous shad profile which appeals to many species of fish in both freshwater and saltwater when their predominant forage is small baitfish. Bass fishermen will find this lure to work extremely well on suspended bass that are relating to balls of bait; this is especially effective during the fall and winter. Anglers targeting lake trout, kokanee and other freshwater species may find the Vibrato to be an effective trolling lure.

The Vibrato's action upon free fall is much like a flutter spoon which possesses an erratic side to side sway as it descends through the water. The difference between the Vibrato and other jigging spoons is its incredible vibration and erratic nature. The falling action of this lure is far less predictable and therefore more accurately mimics dying shad which often free fall intermittently between attempts at regaining their healthy swimming action. When allowing the lure to free fall be sure to watch the line closely as most strikes will occur during this time; when the vertical jigging bite is on you're lure won't reach the bottom. If the Vibrato does happen to find the bottom before being struck, the best retrieve is usually quick snaps of the rod tip followed by more slack line descents.

The Sebile Lure Vibrato comes stock with dual treble hooks positioned on each side of the lure. While many anglers prefer to change out their hooks, we would suggest only substituting them for comparable sized treble hooks as the Vibrato's action is specifically tuned for the stock hooks. Additionally, larger hooks tend to foul with the line more and result in wasted casts. We offer the Sebile Vibrato in two sizes: 1/2oz and 3/4oz in two excellent color patterns.