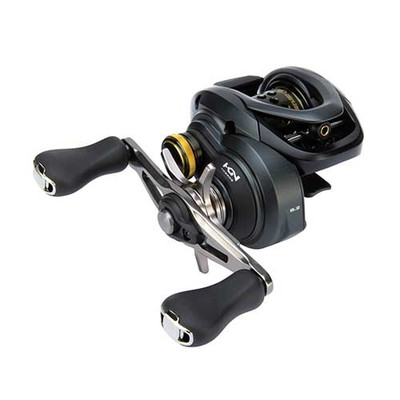 The new Curado BFS (Bait Finesse System) expands the Curado lineup of low-profile reels while redefining finesse fishing for tournament anglers. Inspired by the Japanese Domestic Market (JDM), the new Curado BFS utilizes an ultralightweight shallow spool designed for thinner diameter lines to allow anglers to cast lightweight lures more effectively than traditional low-profile models. The Curado BFS incorporates Shimano's Finesse Tune Brake (FTB) system to reduce the spool's weight by moving the braking unit from the spool to the palming side-plate. The result: the spool takes minimal force to turn and allows anglers to effectively cast lightweight tackle. Unlike traditional magnetic brake systems that maintain the same drag on the spool throughout the cast, Shimano's FTB capitalizes on the cast's centrifugal force and the magnetic brakes automatically adjust to slow down the spool only when braking is needed. Fully adjustable, anglers can fine-tune the FTB with the external dial or by adding or removing individual magnets as needed. The perfect antidote for picky fish, the Curado BFS is the ideal tool for anglers to downsize baits to increase their success on the water.

This drag material provides a wider range of drag settings, along with the smoothest Shimano drag performance ever.

The HAGANE Body is a metal reel body with high rigidity. The body stiffness and impact resistance virtually eliminates body flexing. The result transforms the angler's actions directly into cranking power. It's efficiency through strength.

These bearings have been through the same process as our A-RB bearings, but feature shields on both sides of the bearings that reduce the possibility of salt or sand inhibiting the bearing's rotation.

X-Ship provides improved gear durability. By supporting the pinion gear on both ends with bearings, the pinion gear maintains precise alignment with the drive gear. This means the gears will stay in the same position under the heaviest loads. The added benefit is that friction between the spool shaft and gear are eliminated. This will enhance the casting performance of the reel with lighter lures, and allow for longer casts.