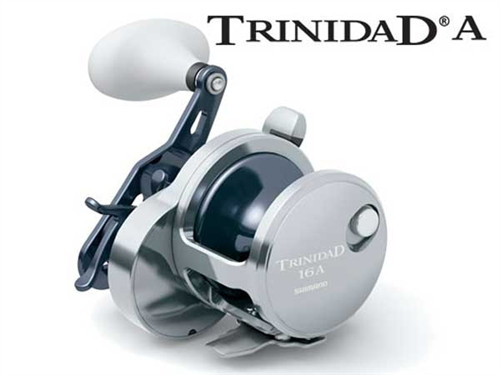 The Shimano Trinidad Series A Reel is a conventional, open-faced offshore saltwater reel that is widely considered the benchmark on which all other saltwater reels were judged. Trinidad is a name that resonates with all Saltwater Anglers. It has earned an impeccable reputation for power and reliability world wide. Shimano's quest for the Trinidad A was no easy task. Lighter, smaller and more compact were the key physical characteristics and they were accomplished. The performance goal was to build the best casting reel in this category and the results are clear: Shimano has shattered their targets and have built a reel for casting which all others will be measured by.

The Trinidad A is known to be a big fish fighter, but aesthetically they are refined as they come displaying a striking appearance. The Trinidad possesses only the finest, high-quality components. Complete with a forged frame and stamped sideplates. Included with every Trinidad is a graphite reel clamp.

Casting - The Trinidad isn't traditionally used to cast. Generally, the reel is best for live lining bait rather than tossing lures. However, the Trinidad is very resistant against backlashes due to its advanced centrifugal anti-backlash system that makes use of interchangeable brake collars. Quickly and easily adjust the spool tension in order to maximize the performance when using varying lure weights.

The Trinidad features an adjustable clicker system for changing the amount of freespool tension. The clicker system is imperative when trolling for big Salmon and Tuna in order to allow the fish to fully eat the bait. This is especially true for Salmon fishing that generally restricts the use of barbed hooks.

The retrieval speed of the Trinidad is an incredible 6.2:1 geat ration that brings in 46" per turn of the handle. The speed of the reel will come in handy when attempting to stay ahead of surging fish and keep the line taught as they make wide turns. Once hooked the fish is getting to the boat. The incredible power exhibited by the Shimano Trinidad is due to its extremely high drag pressure that will withstand most big game fish. Durability isn't a concern. The Trinidad can handle the largest Sturgeon, Halibut, Salmon and Albacore without issue. Anglers have found the Trinidad to have very few constraints when it comes to fish species.