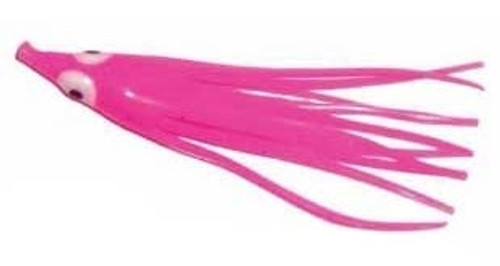 For those not familiar with the term, Hoochies are more or less a hollow plastic skirt that can be threaded on a leader, rear hook of a lure or on a jig head. The first hoochies to reach the United States were found on the west coast where anglers employed the 4" - 6" variety for their saltwater Salmon trolling applications. As more anglers began trying them, the overall consensus was these artificial plastic skirts were nearly or equally effective to real bait fish such as anchovies and herring, but simpler, faster and cheaper to use than the real thing.

Now, after years of use and angler experimentation, the market has increased tremendously and their application has expanded from ocean salmon trolling to many species of fish both saltwater and freshwater. Anglers targeting trout, kokanee, coho and salmon in freshwater lakes have experienced first hand just how effective these plastic skirts can be. Evolving the technique into freshwater meant downsizing to smaller options, most companies now make hoochies as small as 1" with most of the popular trout and kokanee sizes between 1.5-3". In fact, trolling with hoochies has become the primary method of catching kokanee and landlocked salmon. The appeal, besides simply catching fish, is that hoochies are fairly affordable and can be utilized in any number of ways. You can pair them with another lure such as a spinner to create a two part attraction or fish them as an addition to live bait to get the best of both worlds. Their flared skirt is a great imitation of many small baitfish.

If you want to create your own rigs for Kokanee and Trout, you'll need a few things. First, the Silver Horde Mini Sardine is the perfect size for this application at 2.25", in addition you'll need a quality fluorocarbon 10lb - 12lb, two octopus hooks No. 6 & 8 and a few beads - the glow in the dark and uv styles have become increasingly popular.

Take your fluorocarbon leader and cut it to about 2 feet and start by snelling your two hooks to the end of it so they are approximately 1 - 1.25" apart and facing in the opposite direction. You don't want them too far apart, just enough where they can each be individually effective if they hook the fish in contrast to having both hooks having to be in the fish. Now, with hooks tied and in place, slide two beads down to the top hook. Finally, slide the hoochie down and work the beads up inside the hoochie all the way to the nose. This helps keep the form of the hoochie and makes sure your hooks are properly in place. Your back hook should be just a little longer than the hoochie skirt.

Because the hoochies have no built in action, you'll have to employ it behind a dodger or flasher to give the lure the appropriate action. For most freshwater lake fishing applications, you'll want your hoochie to be about 3 dodger lengths from the rear of the blade so if you are using a 4" dodger that equates to a leader 12 inches from the back of the blade. The closer the hoochie is to the dodger the more action it will have and vice versa. While the 3 lengths leader is a rule of thumb, its like anything in fishing, it's just one way of doing it.

While the basic principles of the rig are the same, there are added details that can greatly improve your hoochie trolling when targeting deeper holding fish. One of the more common additions is tipping the hooks with a live or prepared bait. For Kokanee, anglers often find corn to give their hoochie an added action that really sets the fish off. The same goes for King Salmon, but instead of corn, one might try small pieces of anchovy or herring. Both also serve as great scent holders and are best fished with a dab or two of pro-cure scent.