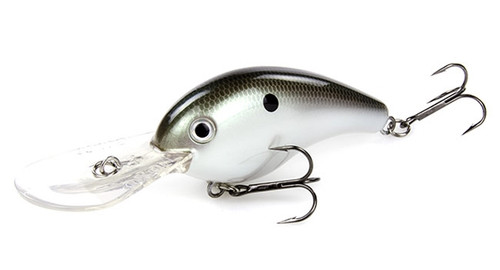 The 10XD Crankbait from Strike King lures is a large profile diving plug designed to mimic the action and appearance of large forage species big bass feed upon. The 10XD crankbait is a revolutionary lure which presents a big meal that appeals to bigger bass. In the past anglers have turned to swimbaits, big jigs and plastics in order to capture the essence of larger forage species such as hitch, gizzard shad, trout and perch. While all effective in their own right, there's no substitute for a crankbait when bass begin to actively feed upon reaction baits. Big bass are known to eat big baits. Coincidentally, bass anglers target big bass. Strike King's all new 10XD deep diving crankbait delivers the big profile to match the hatch with the erratic action produced by a crankbait. At 6" long, the 10XD will easily hit the 25-foot mark on 14-pound fluorocarbon line, allowing you to get a crankbait in front of fish that you previously could not reach with hard plastic plugs. It also casts and pulls surprisingly easy for its behemoth size.

"The whole deal with the 10XD is that its size, depth capability, and action appeals to big bass. It catches the grade of fish that win tournaments and stories are told about," says Phil Marks, lure designer for Strike King and recent winner of the FLW Tour Open on Sam Rayburn. "It is perfect for situations such as what I faced at Rayburn. I knew that there were big bass in the area that I was fishing and I knew that I needed to catch them in order to win. The 10XD will do this for a lot people at a lot different venues in the future," stated Marks.

The Strike King 10XD is truly a big bait - its 6" length rivals most swimbaits on the market today. Special tackle considerations are definitely in order when using the 10XD crankbait - weighing in at nearly 2oz, anglers should adjust their gear accordingly. We recommend a magnum crankbait rod or swimbait rod that's at least 7'6" in length. The effectiveness of this crankbait can be verified by the results of the 2012 FLW Open at Sam Rayburn Reservoir. It was at this event the 10XD was introduced to a world wide audience thanks to the event's winner,and Strike King lure designer, Phil Marks. After 4 days of competition Marks amassed 82lbs of bass topped off by his final day stringer of 32-12 caught primarily using the 10XD crankbait.

"The bass on fisheries on the TVA, Texas, Florida and California eat big shad. Even as big as this crankbait is, it's still much smaller than some of the shad, bluegill and tilapia big bass eat. So to me it's still one of those baits that will shock the angler, but probably not the fish. Now we can get it down there in front of some bass we previously couldn't reach. And people think it will wear you out, but really it doesn't pull much harder than a 6XD." - Kevin Van Dam (B.A.S.S. angler and Strike King Pro Staff)

The Strike King 10XD Crankbait measures 6" in length and weighs nearly 2oz. Anglers can expect to reach depths of 25 feet when utilizing 14lb test fluorocarbon line. We offer the 10XD in 12 color patterns designed to match the hatch of any lake throughout the country.