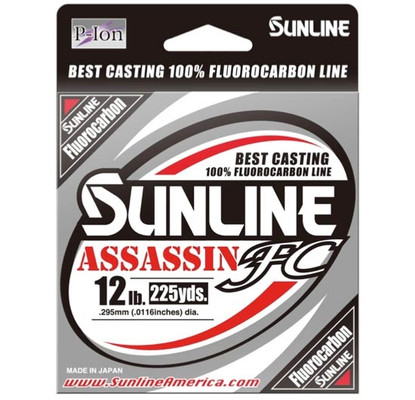 Sunline Assassin FC is a 100% fluorocarbon line featuring the latest innovation in fishing line - P-ion Technology. Assassin Fluorocarbon is the first fishing line launched in the United States featuring the P-Ion Technology which is inteded to improve slickness, strengthen abrasion resistance and ultimately increase longevity of the line's lifespan. Sunline's patented process achieves these improvements by chemically altering the line's surface to allow resin processing to bond at a molecular level. This processing increases line performance and allows the line to retain key characteristics longer. According to our research, the line goes through an ionization process using exposure to an electric current. The process chemically alters the fluorocarbon material in it's raw state making the surface slicker which ultimately increases abrasion resistance by up to 30% and an equal increase in line longevity.

Diameter-wise, you'll notice that the Sunline Assassin FC is just slightly thicker than Sunline's Sniper FC in the same line size. However, due to the production process of the Assassin FC it will prove to remain clearer throughout it's use when compared to other fluorocarbon lines. This fluorocarbon will not cloud up or become "hazy" like other fluorocarbons after a few weeks on the reel.

Sunline began working with the researcher from the Tokyo Institute of Technology in 2009 to develop plasma-treated fishing lines. Over the next 3 years, Sunline's R&D department did on-the-water testing to refine the process and gauge the capabilities of the P-Ion technology. In February 2013, Sunline debuted the technology at the Osaka Fishing Show in Japan. Last October, Sunline set sales records for Fine Float, one of its more popular lines overseas, that was the first line treated with the new technology. The plasma ion, or P-Ion, process alters the line and adjusts the properties in such a way that the line is able to perform better and last longer. Rather than adding a resin coating, the plasma-ion process changes the chemical makeup of the line, making it more durable.