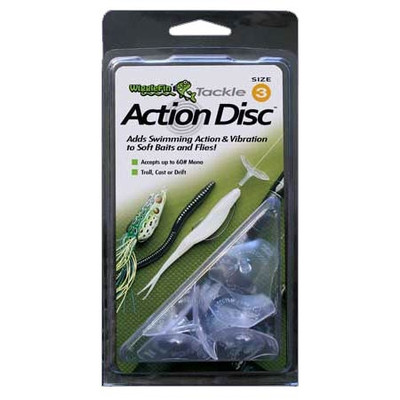 Wiggle Fin ActionDiscs slide on your line in front of a wide variety of soft-plastic baits, trolling flies, natural baits or lures. Using the principal of chaos, ActionDiscs produce a natural, non-mechanical swimming action and vibration, resulting in more strikes and bigger fish! ActionDiscs add wicked wiggle-action and vibration to nearly anything you tie on behind them. The Wiggle Fin ActionDiscs are very commonly used by kokanee, salmon and trout fishermen when trolling their hoochies or squid behind a dodger or flasher in order to create more action that seeks to mimic the non-standard swimming motions of real baitfish. A standard side to side swim may get the job done, but once you see the Action Disc at work it'll be tough to go back to standard trolling practices. Make sure to pick up some SlideLock Stoppers to rig your ActionDisc correctly.

We offer the Wiggle Fin ActionDiscs in three sizes: #1, #2 and #3 - each has different suggested uses that are detailed in the chart below. Quantity: 6pk

The principal of chaos...

ActionDiscs do not produce the same rhythmic mechanical action as "crankbait lip" devices or spinner blades.

As the bait is drawn through the water, pressure builds on the cupped front surface of the disc. When the pressure reaches a point of instability the disc turns to release it. This is where chaos enters in. Because the ActionDisc is perfectly symmetrical, the direction the disc tilts to dump the pressure is completely up to chance. It can go up, down, left, right or any degree from its center axis.

Once the disc decides which direction it will tilt, the tube on the back of the disc acts as a lever, bending the line in the opposite direction and pulling the front of the bait with it.

Once the water pressure is released the disc rights itself and begins again. Depending on the speed of the retrieve this process can take place anywhere from 3 times per second on a slow retrieve up to 15 times per second at a trolling speed of 4mph.

This rig allows the motion created by the disc to be transferred directly to the hoochie or buck tail resulting in a natural swimming action. Rig the bucktail or hoochie using a SlideLock adjustable stopper. When you are ready to fish, test the action by dragging the rig next to the boat at trolling speed. Adjust the stopper to position the ActionDisc closer or farther from the fly until you get the action you want.

Use our series II ActionDiscs to add deadly action to your favorite rotator head or cut plug herring rig. Use our SlideLock adjustable stopper to space the disc 4" to 6" ahead of the bait as shown in the photo below. The disc adds a vibration that causes the tail of the herring to shudder with a natural swimming action and will not interfere with the "roll". The frequency of vibration created by the ActionDisc attracts salmon from long distances even in heavily stained water or low light conditions when trolling deep with your downrigger.

ActionDiscs allow you to cast tube flies or trolling flies with a spinning rod just like you would a spoon or spinner. Put a sliding egg weight on your line, slide on the ActionDisc and tie on your faviorite fly. This has become one of my faviorite lures for trout and bass. The SlideLock stopper enables you adjust the distance between the fly and the disc allowing you to "tune" the action of the fly. Click the SlideLock link for details.

How to rig hoochies & bugs with ActionDiscs

For most Kokanee rigs you'll want to use our larger, ActionDisc Series II and SlideLock stopper beads. The larger disc creates the best dodging action for squid baits and bugs at slow trolling speeds.

The diagram above shows how to rig a zoom Super Fluke for Striped bass, but the basic technique is the same for any soft plastic bait. ActionDiscs make your best soft plastic bass baits even better. You can still fish your bait slow and twitchy, but with a jerk of the rod tip or a quick retrieve your soft plastic takes on the swimming action and vibration of a crankbait!