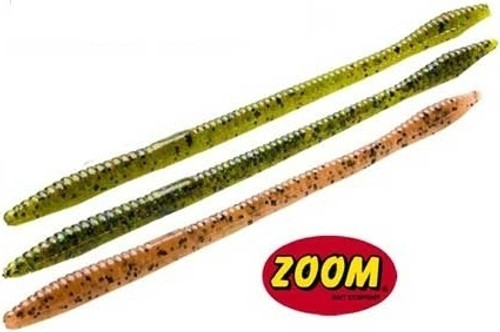 "These look like plain-vanilla, do-nothing plastic worms, but largemouth bass love them. They float and can be fished on or near the surface when Texas-rigged with no added weight. Or add a very light worm weight (1/32 or 1/16 ounce) and allow the worm to sink slowly in heavy cover. I have caught an awful lot of fish doing the latter with a 6-inch green-pumpkin version. One more trick: Slit the last 1/2 inch of the tail for a tad more wiggle."

The Zoom Trick Worm has become a staple of all serious bass anglers' arsenal. The lack of action, contrary to conventional wisdom, is actually what makes this bait so effective. The Trick Worm is known to draw strikes from bass that would otherwise remain un-catchable. There are several ways to rig the Zoom Trick Worm including: Texas-Rig, Carolina-Rig, Drop Shot, Shakey Head and Wacky Rig just to name a few. Anglers from California to Maine have relied upon the Trick for many of their soft plastic worm needs.