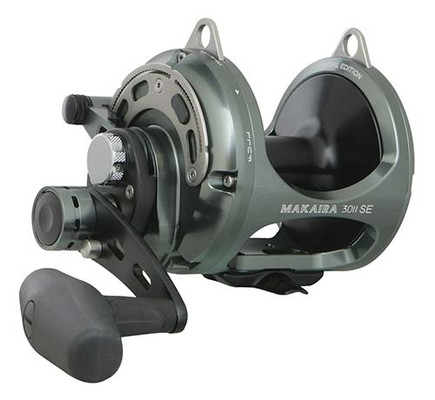 The Okuma Makaira SEa Reels are 2 speed, lever drag reels designed for a wide variety of saltwater game fish species. The SEa is a special edition of the standard Makaira reels. Major differences between the standard and SE versions start with the aesthetics - you'll notice these reels have a gunmetal finish opposed to the gold of the standard edition. The silver etched yellow fin tuna glistens as bright as the sea on top of the dark gun smoke anodized aluminum frame. This reel is as smooth as it is sleek with its Carbonite Dual Force drag system and its helical cut gears. Its over sized handle and lower low speed gearing versus the original Makaira serve up extreme torque for the Makaira SEa. The Makaira SEa is a great edition to the already popular Makaira family which are all backed by a 5 year warranty.

The differences in performance you'll find in the SE series are significant, but not necessarily applicable to every fisherman's needs. For the most part the standard Makaira will be more than enough reel for deep sea fishing applications. The SE versions are really for those anglers who put their gear under the most intense uses and expect them to perform flawlessly without much care. We're talking fishermen who are hauling in massive sized Tuna off the west coast and Mexico. The mechanical differences include the changes:

The new Makaira SEa Reels feature a carbon DFD (dual force drag) system for exceptional drag performance, high drag capacity, long term reliability and maximum alignment and durability. Okuma utilized a "Pull Bar Drag System" in all of the Makaira Reels with the intended advantage that the drag is being pulled rather than pushed. This eliminates the heavy pressure placed on the left side plate of the reels and relies upon the frame for reel stability - with Okuma's new engineering they have completely eradicated the issue. The Pull Bar design creates no pressure that would cause frame flex or reduced drag pressure. Okuma's SEa Makaira Reels have none of the flex issues common with other lever drag reels which allows anglers to confidently fish the correct size reel rather than upsize to overcompensate for the inadequacies.

Sourcing their drag system design to Tiburon Engineering of Santa Ana, CA, Okuma was able to increase maximum drag pressure, reduce side load pressure on ball bearings and improve heat dissipation in their Makaira SEa Reels which ultimately results in longer lasting smoothness. Comprised of two carbon fiber drag washers bonded together with a fiberglass core, Okuma's Dual Force Drag is considered a wet drag system. Start-up inertia has been reduced to next to nothing due to the washer coating process which utilizes a thin layer of Cal Sheet's universal drag grease. The Makaira SEa Reel's smoothness can be largely attributed to the precision ground, polished stainless steel drag plates. The stainless steel friction drag plates have a minimum 32 Rockwell hardness allowing for high-end drag settings and consistently smooth drag performance at all ranges!

We offer the Okuma Makaira SEa Reels in 6 models ranging from 8II to 30II, for more detailed information, please consult the specs chart below.

Carbonite - Okuma's all-new "Carbonite" drag system features a newly-developed carbon-based drag material which displaces heat and friction consistently and steadily even under the harshest of fishing conditions. Used in conjunction with a small amount of specially-formulated Okuma drag grease, the Carbonite drag system allows for a much wider and smoother drag range, all while maintaining exceptional performance and pure fish-stopping power.

2-Speed Gearing - Okuma's 2-speed technology incorporates two sets of stainless steel main and pinion gears, allowing anglers the option of a high-speed gear ratio or a powerful low-speed gear ratio for maximum power and torque. To shift gears it is as easy as pushing a button or popping a lever with Okuma's unique shifting design to obtain the appropriate gear ratio you desire.

T-Bar - T-Bar Handle: The patented design of the T-Bar handle offers a true ergonomically correct angle to ensure an angler gets maximum power with minimum fatigue. The T-bar takes full advantage of the natural dynamics of the human hand, wrist and forearm to help sustain power and endurance for the angler.