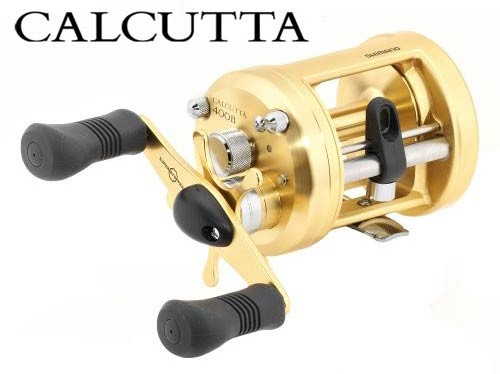 The classic round reel, the Shimano Calcutta B Reels offer strong, reliable performance that can handle a wide variety of fishing applications including both freshwater and saltwater. One of the favorites of freshwater big bait fishermen targeting largemouth and striped bass, musky and more - the Shimano Calcutta B chucks swimbaits a mile before going head to head against trophy quality fish. This super strong reel is constructed using ultralight forged aluminum frames and sideplates that ensure all elements of the reel will remain in exact alignment for a lifetime of smooth, powerful fishing and the rigidity needed to withstand the power of surging fish.

The Calcutta 100B is the smallest model in the lineup designed for fishing lures with 8-14lb test making this an excellent choice for crankbaits. This reel possesses the high line capacity necessary to whip those deep diving crankbaits way out there and pull them through the strike zone for a longer period of time. As we get into the 200 size models, the reels get a bit larger with extended line capacity. The 200 size is favored by salmon and steelhead anglers as well as bass fishermen. It's a great choice for light saltwater inshore applications as well. Finally, the Calcutta 400B is probably the most popular in the Shimano Calcutta Reel family and is widely used by freshwater big bait fishermen and saltwater anglers alike. This reel possesses the strength and rigidity to handle monsters of the sea, lake or river. If you're looking for the perfect swimbait reel for bass, this is it. High line capacity, strength and a slow gear ratio which are all preferred characteristics for chucking the big hunks of plastic or topwater wood baits. Equally as effective for coastal saltwater fishing when targeting rockfish, yellowtail and other species of fish close to shore.

While Shimano has introduced new series of Calcutta Reels with updated features, the B series remains a popular choice. We offer the Shimano Calcutta B Reels in five models: CT100B, CT200B, CT200GTB, CT201B and CT400B