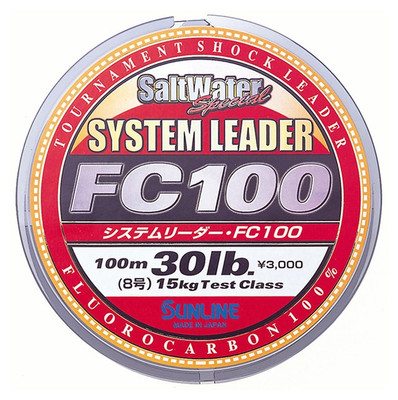 Sunline FC Saltwater Special System Leader represents the evolution of a new concept in fluorocarbon saltwater leaders. The Saltwater Special System Leader displays a balanced design that is line weight specific: emphasis on suppleness and minimum interference on lure movement, focus on hardness and the ruggedness to withstand abrasion and sharp teeth from big game species. The strength of this line can be largely attributed to the TRP (Triple Resin Processing) which leads to outstanding abrasion resistance against rocks, debris, weeds, and the fish's body. Additionally, knot strength has been boosted since these leader lines are often tied in uni knots or blood knots. Now you can use a much thinner leader than was previously possible - far more durability.Non-stress spooling to avoid crushing or flattening of the line. Sunline FC Saltwater Special System Leader is 100% fluorocarbon and an ideal choice when choosing a leader line for saltwater fishing applications.