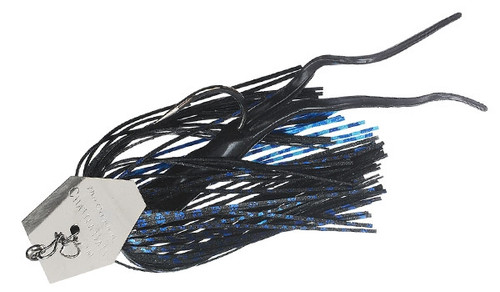 The Z-Man Original Chatterbait is the original vibrating swim jig displaying an erratic action that pulsates through the water mimicking both the action and water movements of shad and other baitfish bass feed upon. Nowadays the origins of the Chatterbait are almost folklore in the world of bass fishing. First really hitting the national scene in 2006 after a wild spring at Lake Okeechobee, the national tournaments held in Florida were basically chatterbait festivals with nearly every angler tossing the vibrating lure. The Original Chatterbait delivers the perfect storm of attraction factors and functionality. As most are aware of, the lure emits an incessant vibration, but it's effectiveness is based upon more than just the obvious. In addition to the chatter portion of the lure, the chatterbait also represents a very weedless presentation that can be fished through just about any type of cover if worked with care. Furthermore, it provides anglers with full control over depth; working from just sub-surface to as deep as one is willing to let it sink. Castability is far better than spinnerbaits or crankbait which have greater surface area spread across multiple planes causing drag through the air and often tumbling uncontrollably. Not so with the Z-Man Original Chatterbait which maintains a single plane with a central weight position that affords precise presentations into small windows and can even be skipped under obstructions with a bit of practice.

Due to it's ambiguous appearance, the chatterbait can mimic just about any forage species across the planet including the basics like shad or bluegill and even transcending into amphibians and other water creatures. Although the original chatterbait includes a very effective plastic trailer, it can be substituted for a plastic lure of the anglers choice and transformed into any prey local to your waters. Time and again, heavy-cover, stained-water anglers rely on the Original ChatterBait brand bladed swim jig to help fill livewells and cash tournament checks. This groundbreaking lure's patented design and trademarked hex-shaped blade combine to produce unmatched vibration, flash, and action, enabling to perform like a crankbait, jig and spinnerbait--all in one fish-slaying package.

We offer the Z-Man Original Chatterbait in two sizes: 3/8oz and 1/2oz in a great selection of colors. Length: 4.5"